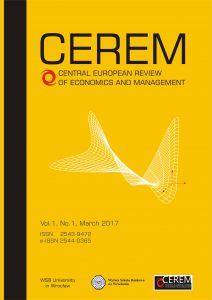 Aim: The internal market for manufacturers of consumer products companies is often too small in order to grant long-term success. Therefore, companies expand and enter foreign markets. This paper presents a planning process for market penetration for the selected foreign market, which will show the possibility of a withdrawal and shows also whether an exit scenario is planned by manufacturers of consumer products and when companies tend to think about a market exit.

Design / Research methods: First, the literature was studied. Based on this, hypothesis were prepared. This was followed by a telephone survey of decision-makers from German manufacturers of the consumer products companies.

Conclusions / findings: A planning process for market penetration was developed, which shows next to the market entry also the market exit. Additional this paper shows that manufacturers of consumer products companies can be better prepared for a market exit than companies without an exit strategy, in particular, if the manufacturer sets out relevant economic parameters for the foreign market which determine whether to remain in the market or leave.

Originality / value of the article: When analysing literature on planning processes for market entry, it becomes clear that an exit strategy is not planned. This may indicate that the authors did not consider a market exit and/or anticipate this as a worst case in their market entry assumption.

Implications of the research: The last market entry of the surveyed companies usually occurred recently. For market exit results to be determined, a further consultation of the companies examined should be undertaken over a longer period of time.

Aim: The aim of this paper is to outline the essential features of the EU Exchange Rate Mechanism – ERM II – including the past experience of its participants and to analyze the benefits arising from Poland’s accession to it.

Design / Research methods: The method of inductive inference based on the comparative analysis of the experience of the present members of the ERM II system was employed.

Conclusions / findings: Participation in the ERM II system does not obligate its participants to join the eurozone; further, it allows for sustaining a floating exchange rate and guarantees help of the European Central Bank, thus reinforcing economic stability and credibility. This, in turn, should translate into the reduction of the investor’s risk premium and of the relatively high cost of capital in Poland, compared to other Central and Eastern European countries, and to facilitate access to that capital, thus having a positive impact on economic growth.

Originality / value of the article: Considering the unwillingness of subsequent governments and citizens to adopt euro, this paper attempts to disseminate knowledge and reinforce the substantive arguments within this area at a time when, in spite of the crisis, the group of the EU countries outside the eurozone has been shrinking.

Arbitration as an instrument of support for business transactions

Aim: The article is concerned with issues relating to arbitration in terms of the development of economy and entrepreneurship. Attention should be drawn, in particular,  to speed as one of its key assets. In terms of the cost of proceedings, arbitration is less expensive than a court process. Another advantage stems from the possibility to design an arbitral procedure. The process of designing the arbitral procedure may proceed according to the arrangement made by the parties themselves. They can decide on the choice of law, arbitrators, their competences and method of conducting a proceeding. Arbitration resolves disputes which arise between entities participating in business transactions. Based on the analysis conducted in the paper, the author takes the view that arbitration is of crucial importance to economic development. A quick dispute resolution has the effect that entrepreneurs show interest in this form of resolving their conflicts.

Design / Research methods: The interpretation of the impact of arbitration on business transactions was conducted employing historical and dogmatic method. The phenomenon of arbitration has been explained as an alternative form which exists next to mediation proceedings.

Conclusions / findings: The studies allow the author to advance a thesis that, apart from the usual economic mechanisms, the mechanisms contributing to the resolution of disputes arising between entrepreneurs ensure the proper functioning of the economy as well. One of such mechanisms is precisely the arbitral tribunal. Unlike common courts, it is a more effective instrument in the hands of entrepreneurs.

Originality / value of the article: There is a two way link between law and economics. The article shows that legal institutions like arbitration in fact serve economic aims. On the other hand, the legal aspects of arbitration can also be evaluated through the prism of economic analysis.

Aim: The topic of the pension pillar III, a voluntary pension scheme, is occasionally addressed in the media making the public wonder whether it is possible to live a dignified life after retirement. The article makes the attempt to show how households’ interest in Individual Retirement Accounts (in the paper referred to as IKE) has changed in relation to the WIG 20 index. The author believes that the behavior of the capital market influences the public in its decision-making with regard to funds accumulation under the IKE pension system. The aim of the paper is to examine the relationship between household’s showing interest in setting up an individual retirement account and the WIG20 index fluctuation. The study was conducted based on data spanning 12 years, i.e. from 2004 to 2015. The paper outlines the characteristic features of IKE pension accounts, as well as the impact of the stock index WIG20 on the flow of funds placed with IKE

Design / Research methods: The analysis using Pearson’s correlation coefficient indicated a small dependency between the number of IKEs and WIG20.

Conclusions / findings: Having examined the different segments if IKE, an unexpected dependency between IKE in a voluntary pension scheme managed by PTE /Universal Pension Fund Company/ and the WIG20 was found.

Originality / value of the article: Investors may find the paper interesting seeing it as a determinant in making investment decisions; it could also be of interest to scholars seeking to investigate in more depth the topic relating to the third-pillar.

Implications of the research: The limitation of the study was lack of data on inactive accounts which have not been deleted.

Aim: The aim of the paper is to analyze the selected components characterizing the demographic potential and the state of social infrastructure in the rural-urban Municipality of Wleń.

Design / Research methods: The data derived from the Local Data Bank of the Central Statistical Office was analyzed, describing population structure, number and density, natural growth, number of marriages as well as the data on social infrastructure, i.e. healthcare, welfare, security, education, sport and culture. In addition, the analyses covered also data from participant observation and data obtained in the course of the public consultations conducted in relation to the development strategy for the years 2015-2022, devised for the municipality of Wleń. The research was conducted for the time period from 2004 to 2014 – the choice was driven by the wish to carry out observations that would span a decade.

Conclusions / findings: The Municipality of Wleń is undergoing depopulation and succumbing to negative consequences relating to the process. The municipality needs active, creative and young population in order to secure future development. Yet, this is a group of well informed consumers of space who expect specific services (including education), hence maintaining an adequate level of social infrastructure provided by the municipality should become a high-priority target for the local authorities. Positive changes can be observed such as better childcare provided in nurseries. While facing aging population, lacking a social welfare home may become a growing problem. The sense of security, on the other hand, is certainly an asset the municipality space offers.

Originality / value of the article: The findings of the studies are useful for local self-government.

Implications of the research: The research findings may prove helpful for the municipality management.

Design / Research methods: The company was examined using a survey method. The findings are the result of the academic internship done at this company. The publication is an outcome of a science project within the framework of the Support Program of the Partnership between Higher Education and Science, and Business Activity Sector financed by the City of Wroclaw.

Conclusions / findings: The paper completes the set of modernization recommendations co-developed by the authors and the entrepreneur’s representative.

Originality / value of the article: In the context of current knowledge, the paper demonstrates the quality of continuous improvement based on the example of a Polish enterprise, which is a valuable source of information given the limited number of studies within this scope in the domestic strand of research. The findings may be used during the implementation of  Kaizen in other organizations.

Implications of the research: The paper follows up on the issues concerned with the implementation of the philosophy of continuous improvement in a business entity, and hence does not encompass the full Kaizen spectrum. In the first part of the series, the findings referring to the knowledge about the concept, implementation methods, etc. were presented.

Aim: The aim of the paper is to review Polish discriminant models and their application to predict bankruptcy on the examples of selected joint stock companies in the years 2013 – 2015.

Design / Research methods: The paper was written on the basis of literature search within the scope discussed. Further, the authors carried out their own examination of certain joint stock companies listed on the Warsaw Stock Exchange (WSE). The discriminant analysis was conducted on the basis of financial statements of the selected companies using Mączynska’s model, the model developed by Gajdka and Stos, Hadasik’s model and the Poznański model.

Conclusions / findings: The analysis shows that not all discriminant models reflect changes in the financial condition of a company. Nevertheless, they are a good tool to evaluate the risk of failure, provided that more than one model are used.

Originality / value of the article: Discriminant models are universal, which means that they can be applied to any company, regardless of the industry they operate in. The results of the analysis can be used as a basis for further studies on the accurate adjustment of discriminant models to companies, depending on the type of business.

Aim: Good governance structures have become an issue of public interest, including public pension systems. The quality and performance of the trustees of the funds influences the income flows to which members are entitled and promised, as well as any shortfalls thereof that may require interventions. We aim to examine the pension fund governance in Tanzania, by focusing on structures and mechanisms of boards of trustees, as well as its perceived challenges and future directions.

Design / Research methods: An extensive literature review provides the conceptual and practical framework for studying the pension funds governance on both a macro (regulatory) and a micro (board of trustees as a governing body) level. This case study describes the system in mainland Tanzania, where various regulators and five pension funds play a role.

Conclusions / findings: Board of trustees are important for funds governance. The pension fund structure and mechanisms in Tanzania uphold high standards. However, a major issue is that the board selection seems to be politically motivated and that the government claims most board seats, making conflicts of interest likely to occur repeatedly.

Originality / value of the article: The Tanzanian experience shows the importance of transparent mechanisms and structures, overseen by an independent and virtuous board of trustees.

Implications of the research: Further works need to be considered to account for heterogeneity in pension systems especially in developing countries.

The journal has been approved for inclusion in ERIH PLUS.

CEREM is indexed in: